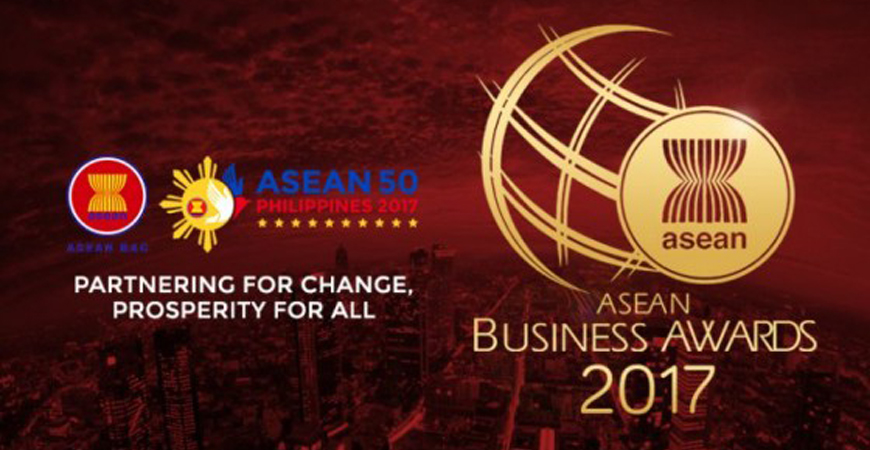 The ASEAN Business Awards is fast approaching and to give an overview of what the awards are all about, we’ve prepared a primer encompassing the background and objectives.

Since its establishment by ASEAN Leaders in 2003, the ASEAN Business Advisory Council (ASEAN-BAC) has been active in promoting public-private sector partnership and consultation to assist the integration of an ASEAN Economic Community (AEC) by 2017. In its efforts to bridge ASEAN Governments with its private sectors, the Council launched the ASEAN Business Awards (ABA) in 2007 to give recognition to enterprises that have contributed to the growth and prosperity of the ASEAN economy.

ABA was conceived to be the first of its kind in the region, with the dual objectives of recognizing outstanding ASEAN enterprises, and to serve as a platform to spread information concerning the ASEAN Economic Community (AEC). In addition, ABA also brings to the spotlight promising ASEAN small and medium-sized enterprises (SMEs) that have the potential of becoming global economic players.

A dedicated Working Group of ‘National Gateways’ consisting of ten ASEAN-BAC Members (one representative from each Member State) forms the foundation of ABA.  The roles of the National Gateways are to promote the event in their respective countries, as well as to select ‘National Judges’ who will be responsible in selecting the recipients of ABA.

Since it was first launched in 2007, ABA has recognised more than 100 companies throughout the region that excel in the categories of: Growth, Employment, Innovation and Corporate Social Responsibility (CSR). In 2015, however, ASEAN-BAC expanded the categories of ABA to include the Priority Integration Sectors (PIS) of ASEAN element, as well as recognising outstanding young entrepreneurs and women entrepreneurs.

To ensure the high-quality and independency of such a prestigious event, ASEAN-BAC engages a Strategic Partner each year to administer the implementation of the ABA Framework; short listing nominations of companies; administering the Judges Meeting and assist in promoting the event throughout the ASEAN region.  This Terms of Reference (ToR) aims to briefly highlight the event’s objectives, categories and criteria, and tentative plan in carrying out ABA 2017.

Aside from recognising outstanding ASEAN enterprises, ABA also has the objectives of serving as a platform to disseminate AEC-related information, as well as to bring to the spotlight SMEs that have the potential of becoming global economic players in their respective industries.

PRIORITY INTEGRATION SECTORS – EXCELLENCE AWARDS
Outstanding performance and presence in the ASEAN Economic Community Priority Integration Sectors. Includes the recognition of integration and connectivity between ASEAN business owned and operated by the applicant.

SME EXCELLENCE AWARDS
Outstanding performance and presence in the ASEAN Economic Community Priority Integration Sectors. Includes the recognition of integration and connectivity between ASEAN business owned and operated by the applicant.

SPECIAL AWARDS
Recognizes enterprises that have created massive social and economic impact in the ASEAN community.

YOUNG ENTREPRENEUR OF THE YEAR AWARD
Outstanding business owner below the age of 45 who has demonstrated significant success though leadership, market positioning and company performance.

LEGACY AWARD
The Legacy Award is for entrepreneurs who have passionately committed themselves to growth and excellence while significantly contributing positive impact to the ASEAN Community. These entrepreneurs set examples by standing the test of time, surpassing challenges, and inspiring others through their successes and triumphs.

4. PROCEDURE FOR NOMINATIONS / SELECTIONS FOR ABA 2017

The nominations or selections for ABA 2017 can be made via one the following channels:

* Automatic nominations from national level ABAs;
* Application through national gateways; and
* Online applications, either through the website of ABIS or ASEAN-BAC