Menu
Entrepreneurship in the Digital Economy

With more than half of the world’s population now online, the digital economy is considered as a dominant force in the world economy. According to the European Commission, “the digital economy now contributes up to eight percent of the GDP of G-20 major economies [and is] the single most important driver of innovation competitiveness and growth.” In fact, McKinsey reported that in 2015, the value of the world trade in digital services surpassed that of goods. Pricewaterhouse Coopers also reported that in 2016, five out of 10 of the world’s largest companies by market capitalization were tech companies—Apple, Alphabet, Microsoft, Facebook and Amazon.

Digital economy today, is touted as the new economy of the world. In the U.S. Department of Commerce’s report on The Emerging Digital Economy, the new economy is said to be based on “industries and forms of IT-enabled business activity […]. These include the IT industry itself, electronic commerce among business, the digital delivery of goods and services and the IT-supported retail sales of tangible goods services.”

In the context of ASEAN, a digital revolution will radically transform the region by 2025 according to an analysis done by A.T. Kearney. In the analysis, the digital economy will affect five main areas in the region as seen in the figure below. 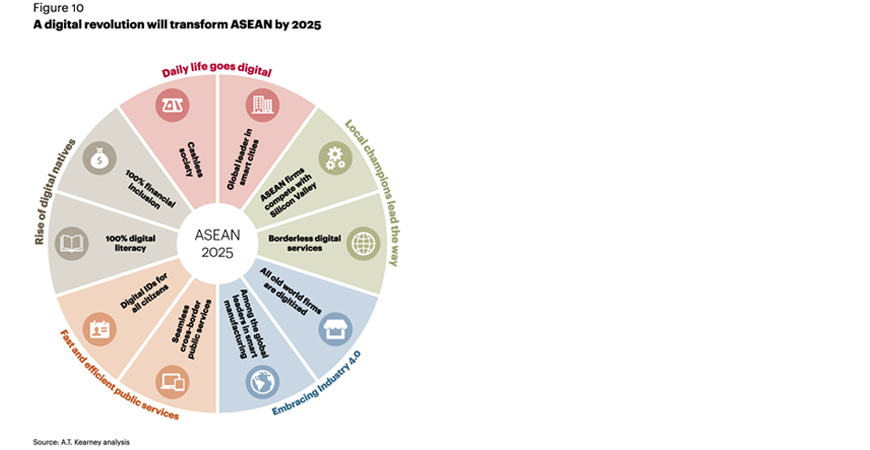 During the World Economic Forum on ASEAN, Co-founder and Managing Partner Patrick Walujo of Northstar Group said that the Fourth Industrial Revolution (a.k.a. the Digital Revolution) is the first time that Southeast Asia “has a chance to compete with the global players.” This is true considering that Southeast Asia is rapidly growing in terms of its number of digital citizens. As of January 2017, 220 million out of the region’s 630 million people are internet users. 211 million ASEAN citizens are active social network users, translating to a 34% social network penetration rate, above the global average of 29%. Most startling however, is that the ASEAN has a 119% mobile penetration rate compared to the global average of 98%, indicating that everyone in the region has at least one cell phone.

Thus, this session on entrepreneurship and the digital economy, leverages on this idea of the ASEAN’s vast untapped market potential. According to a WeAreSocial study, the number of digital citizens present in the ASEAN is constantly rising by double digit percentages and the current market potential is twice the size of the US and larger than that of Europe. With the great number of people now having access to the internet, the e-commerce market of ASEAN is still on its infancy stage. Though the Singaporean e-commerce market is more mature and the Malaysian market is more dynamic, in Indonesia, Thailand, the Philippines and Vietnam, e-commerce is still at a very early stage and remain an important reservoir of growth for ASEAN. Optimistically, A.T. Kearney forecasts a theoretical market size of USD67-89 billion for ASEAN in the future. This attracts many big investors and companies such as e-commerce giants Amazon and Alibaba to the region.

To shed further light on this topic, local and global champions of the digital revolution will come together to discuss the most pertinent issues regarding entrepreneurship’s role in our fast-changing world.

ABIS  2017 is the biggest and most prestigious business event in ASEAN  set to be a three-day conference presented by the ASEAN Business Advisory Council which will bring attention to the business, investment opportunities, global issues, and key strategic directions that impact on business opportunities for ASEAN member nations today. To know more about this year’s ABIS, visit  www.abis2017.com.