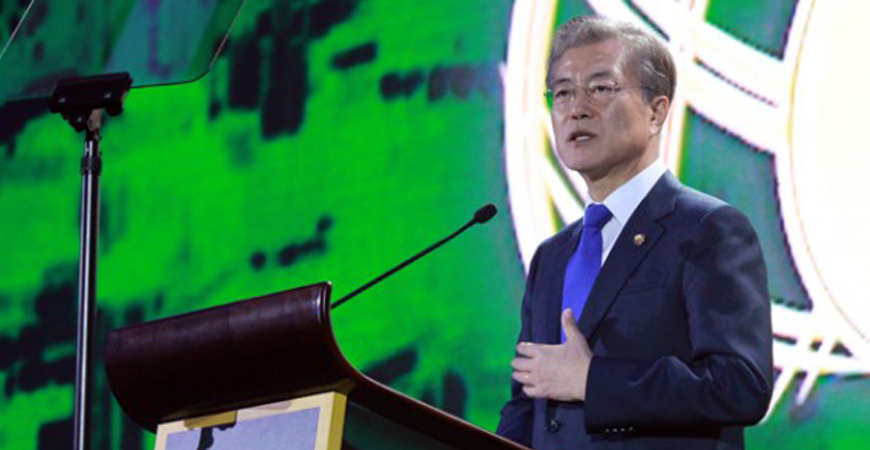 MANILA: November 13, 2017—Republic of Korea’s President Moon Jae-In drew parallels between the stories of shared struggle and triumph between Korea and ASEAN during his keynote address at the ASEAN Business and Investment Summit. Korea and ASEAN states have comparable histories of overcoming periods of turmoil such as colonization, civil unrest, democratization and the Asian Financial Crisis.

Moon shared his vision for our collective futures was banked on a community composed of 3 Ps—people-centered, peace-loving, and mutual prosperity.

Of the first, Moon shared that “ASEAN business leaders first will pursue a people-centric diplomacy. My political philosophy is that people come first. It corresponds with the vision of people-oriented, people-centric community pursued by ASEAN. To share the future together we need to be friends who understand each other.”

A peace-loving community was also tackled by Moon as he committed to ensuring the safety of our collective peoples, specifically with regards to the threat of North Korea.

Mutual prosperity will be pursued by Moon through economic cooperation and investments in ASEAN that will bring in jobs and advance the state of technology. “For the ASEAN countries striving for growth, Korea is the best partner to share the experiences with,” he said.

The President then elaborated on the premier areas for cooperation between the nation state and the regional bloc, namely: transportation, energy, water resource management and Smart ICT.

Korea is known worldwide for its top-of-the-line transport railway system—something many ASEAN member states cannot identify with at the moment. Moon shared that the Korean government is already working with Vietnam to establish a metro system in Hanoi and Ho Chi Minh.

In terms of energy, Korea has several joint ventures in a number of ASEAN countries in hopes of developing the “future of renewable energy cooperation”.

Water resource management is another area of cooperation mention by Moon where various hydro- projects are being done in ASEAN to  espouse better use of water for businesses and localities alike.

The foremost area of cooperation where Korea sees fit is in Smart ICT. Korea is known for having the best Smart ICT infrastructure and they are looking towards ASEAN to pilot and investigate building smart cities.